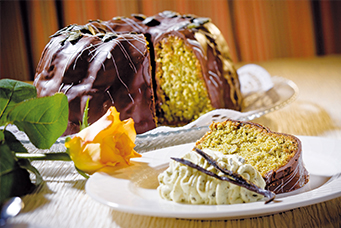 Grease and flour the bundt pan, preheat the oven to 180 °C.

Beat the egg whites with a pinch salt and the granulated sugar until they form stiff peaks. Mix the flour with the baking powder and ground pumpkin seeds and add to the egg yolk mixture, alternating with the beaten egg whites and mixing lightly.

Fill the batter immediately into the bundt pan and bake at 170 – 180 °C for approximately 70 minutes (use a wooden skewer to test whether the cake is baked right through). When finished baking, remove from the bundt pan and let cool.

Spread hot, pureed apricot jam on the cake and coat with the finished chocolate fondant. Sprinkle the bundt cake with the chopped Styrian pumpkin seeds while the icing is still soft and put in a cool place until serving.